Hello! I don't know if you've seen the new expandable paper pads from me & my BIG ideas, but they're amazing! Basically they're folded sheets of gift wrap put into a little booklet form. You can tear out the page and it's larger than a normal 12x12. Therefore you can use it for things that you don't want to have to seam two papers together for.

For instance, I covered a mini album with some patterns from THIS specific paper pad. Here's a little tutorial on how I did it! 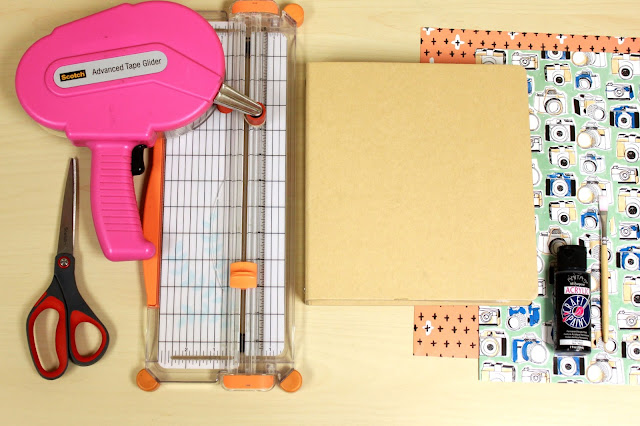 1. Trim paper to fit album. Because these papers come folded, you can mark where you need to cut and then fold and fit them into your paper trimmer! 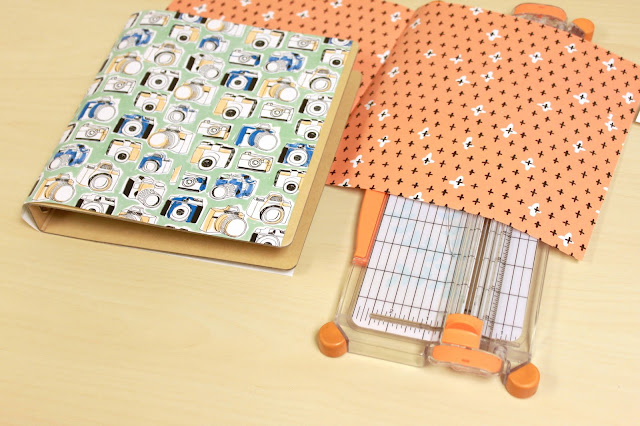 2. Paint the edges of your album. This gives a nice finished look. TIP: Paint around the rings on the inside of the album as well-- this will help hide any mess-ups you might make when cutting the paper to fit around the rings. 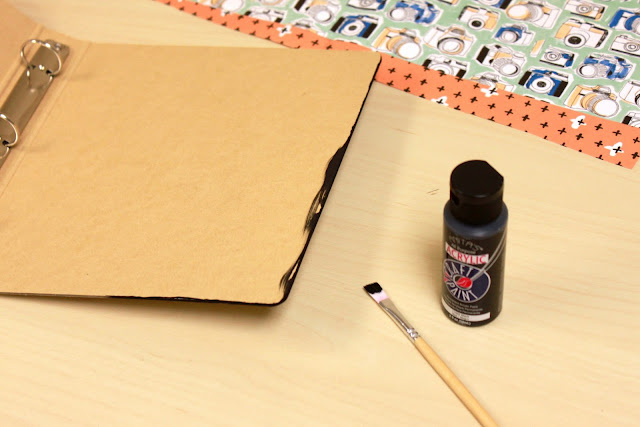 3. Add roller adhesive on one side of the album and place paper on. Add adhesive as you go. (TIP: DO NOT put adhesive on all at once. If you do this, your paper will more than likely get stuck where you don't want it to stick.) Trim corners with scissors if your album has rounded corners. 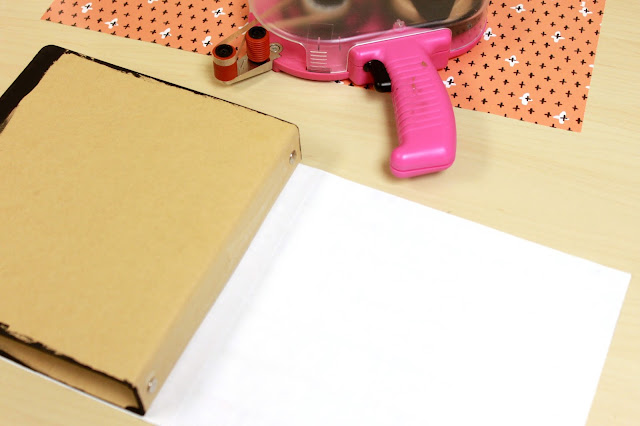 4. Repeat step 3 for inside. Use an x-acto knife to trim around inner rings. 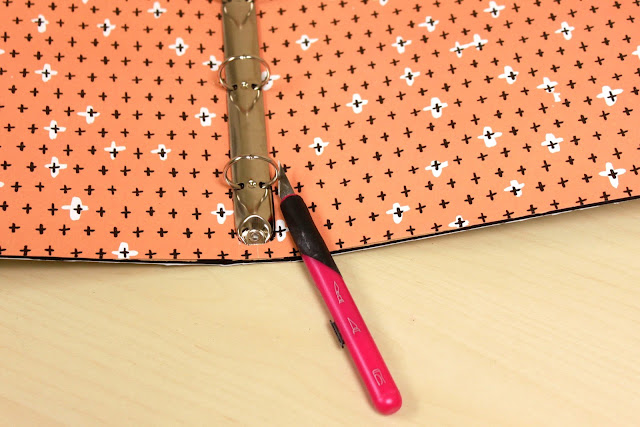 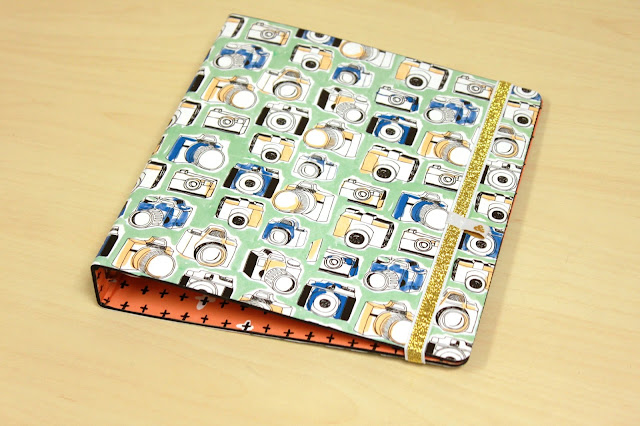 I used an elastic band from the HAPPY PLANNER™ line of products to hold my album closed. I like that now I can add in as many pages that I want and can still hold it closed! I'm so excited to fill this mini album now that it doesn't look pain and boring. 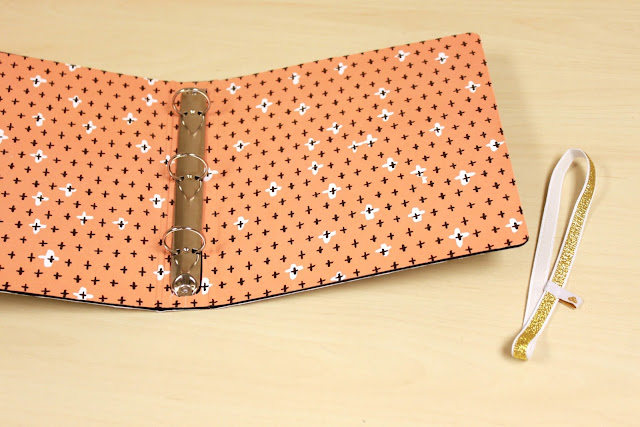 Visit the mambi blog to see this project! :)

Posted by Heather Doolittle at 12:00 AM No comments:

Hello! I have been playing around with my debut collection "Here + There" and can I just say it's soon much fun?! It's so crazy to think that I have gotten to design my own line. It's so much fun to use!

For this layout, I used an older photo from last summer (is that considered old? lol) that I took in Berlin. I have included this photo in mini albums, PL layouts, etc. It's one of my all-time faves from the trip. This little sunglasses boutique was super cute. It was named some random tourist-y name like "I <3 Berlin" or something. On one side of the shop, there were souvenirs and then on the other side it was a sunglasses boutique. It was styled SO cute and I bought a pair for like $17 or something. Very reasonable for some good sunglasses! I'm still kicking myself for not buying the cat eye ones as well as the pair that I actually bought. Ah well. 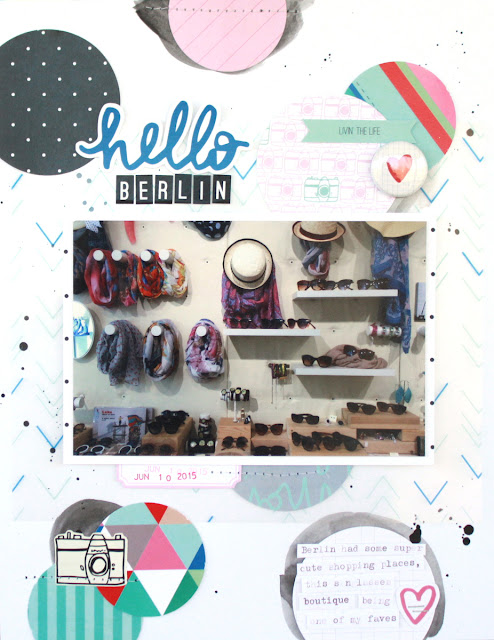 The transparencies from my line are my FAVES. Seriously. They're so fun to layer. I used the blue arrows "Let's Go" clear page for this layout. 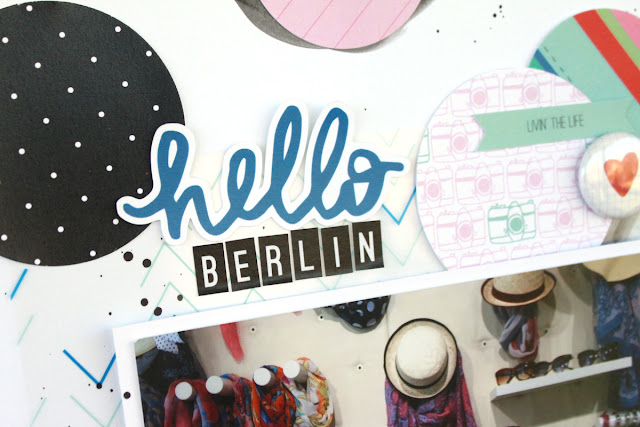 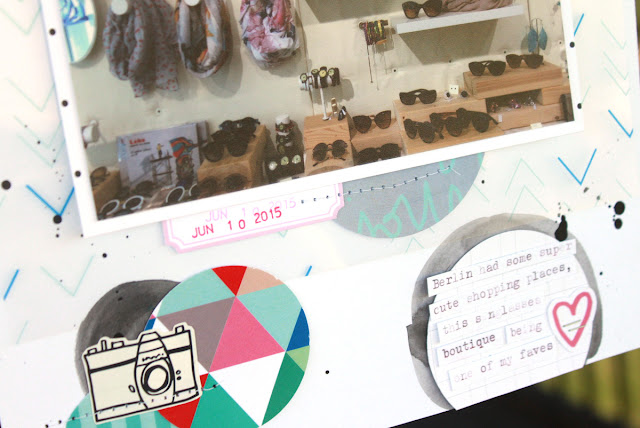 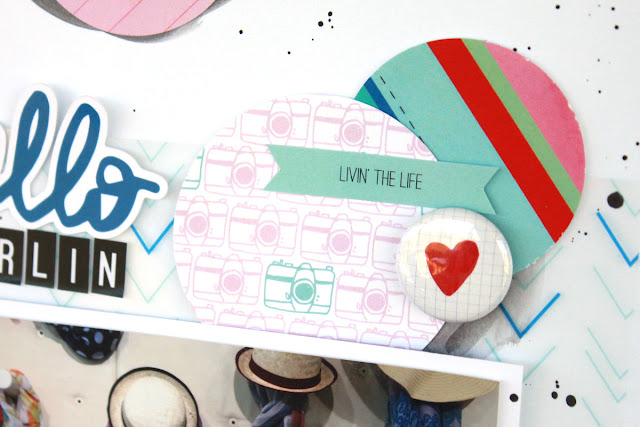 Everything I used on this page is from my "Here + There" line, so check it out in the store if you see anything you *need! :)

A few weeks ago, my friend Mecia drove down from Kansas to where I live in Alabama. We then made a road trip to Savannah, GA and the surrounding areas. :) We had a total blast. Lots and lots of good memories made. I thought I'd share some of the pictures from the trip!

There are so many cobblestone roads in Savannah. And lots of huge live oak trees with spanish moss flowing down from their branches. I think it looks like a mix of magical and creepy. LOL 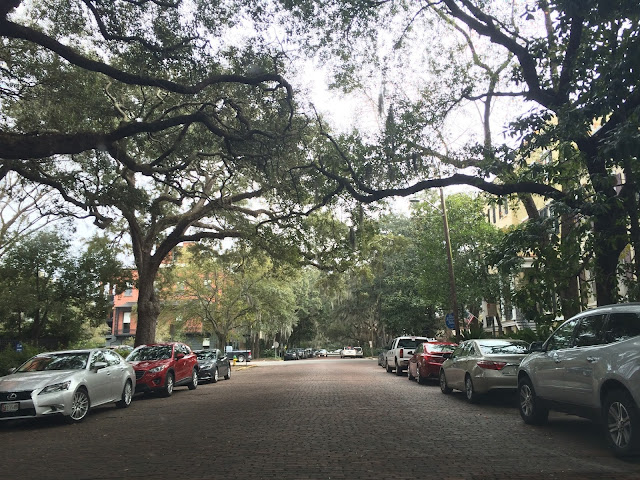 It was COLD the day we were exploring Savannah. Like, mid 40's with some crazy wind. Good thing we brought our boots and scarves! Mecia really wanted to visit the Cathedral of St. John the Baptist on Sunday. She had never been inside a cathedral before, so we went there for a bit. There was this super cute coffee shop across the road called Mirabelle Cafe and we got some (really good) chai tea to warm us up. 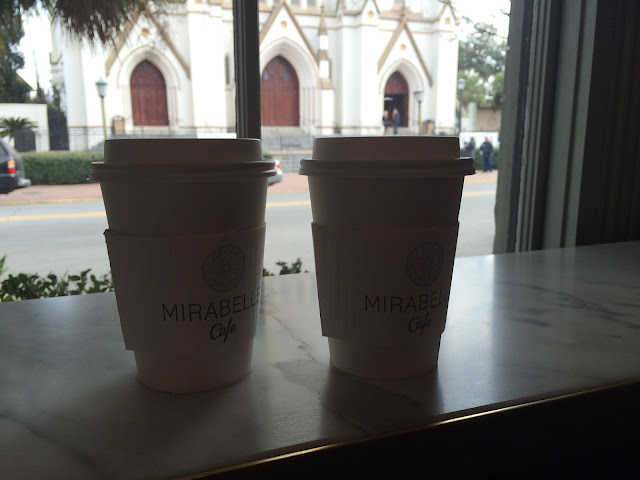 Selfie! (the only selfie that we took that Mecia actually likes... picky picky) 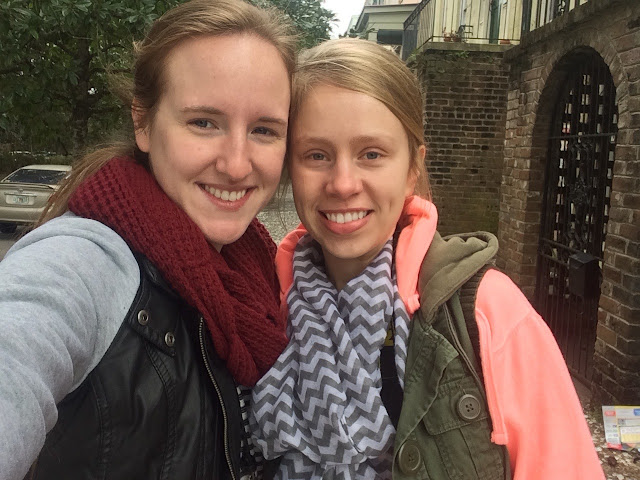 Another cool place we visited was The Paris Market. It's basically like Anthropologie on steroids. Super cute displays, but crazy expensive prices. It was so fun to look through though. 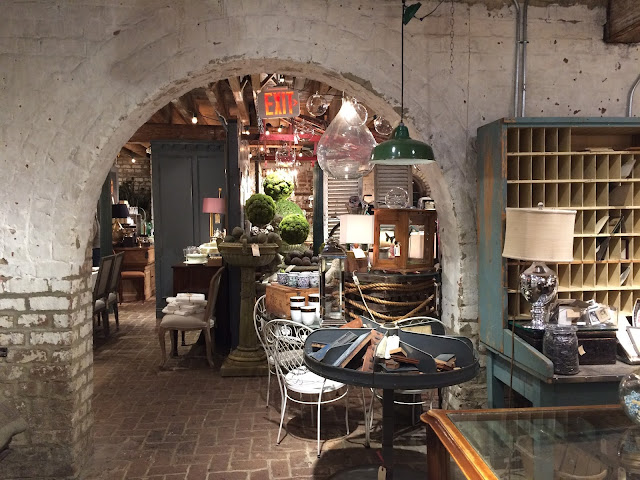 We took a free ferry ride over to Hutchinson Island so we could get a full view of River Street. We found out by accident that River Street is where all the bars are... oops. There are also cool places there to eat on River Street, like where we ate on Saturday night-- River House Seafood. Oh-- and don't forget the candy places! :D 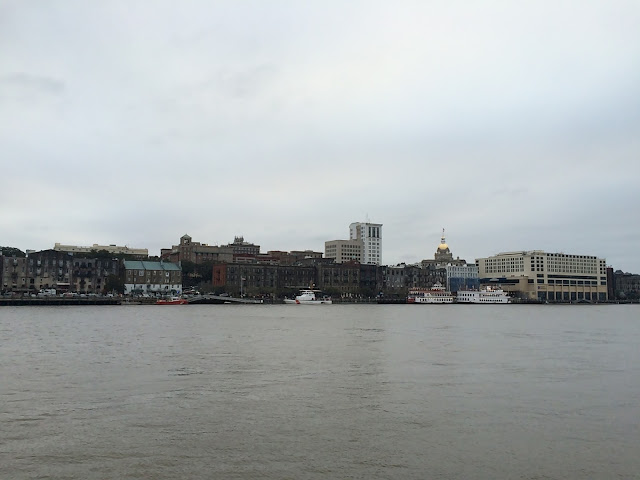 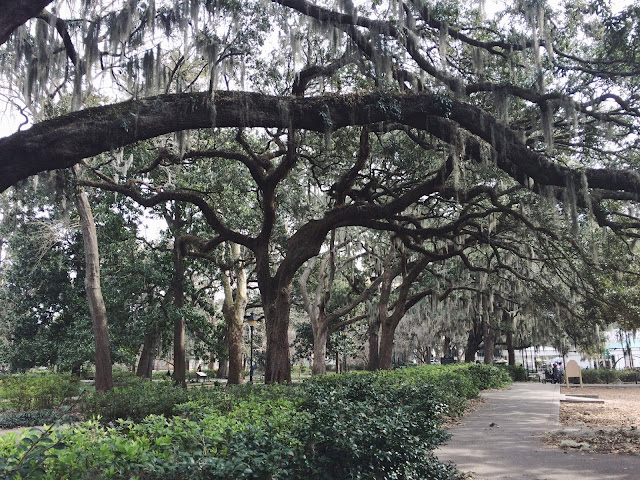 One can't visit Savannah without eating some Leopold's ice cream! It was sooo good. Funny story here... since it's girl scout cookie season, there were some girl scouts selling cookies outside of Leopold's. They said they were $4 apiece or 5 for $20. We bought 5 because we thought we were getting a better deal... then while were eating ice cream, I realized... yeah, we just got suckered. By little girls. We felt super stupid. Although we DID enjoy our cookies later. ;) 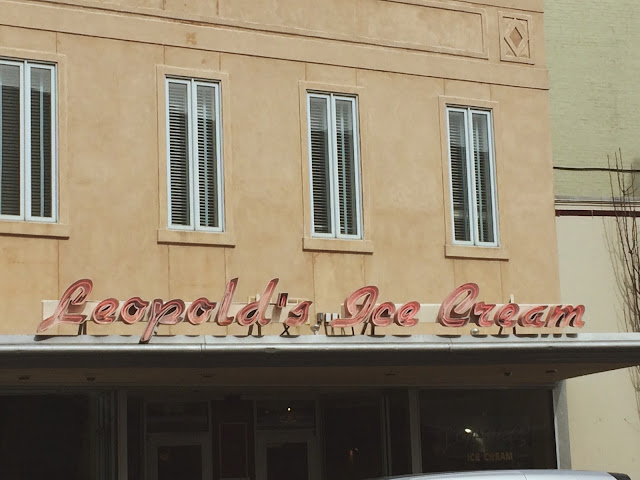 Mecia's choice-- Back in the Day Bakery. We had to make a trip back to Savannah from Hilton Head, SC before going home because Mecia wanted to go here so bad. But hey-- it's vacation! The cupcakes were amazing though. 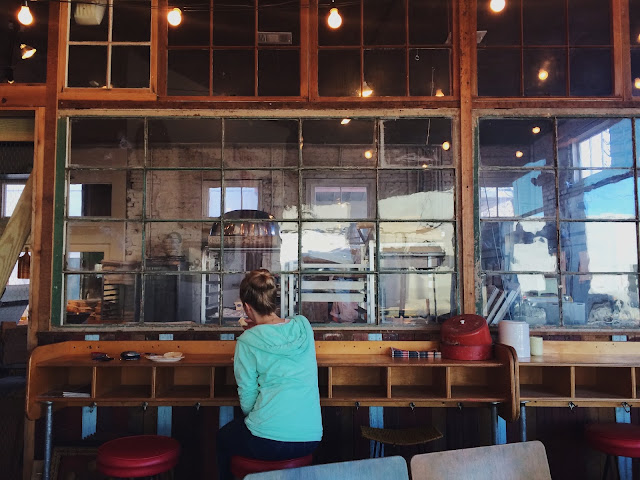 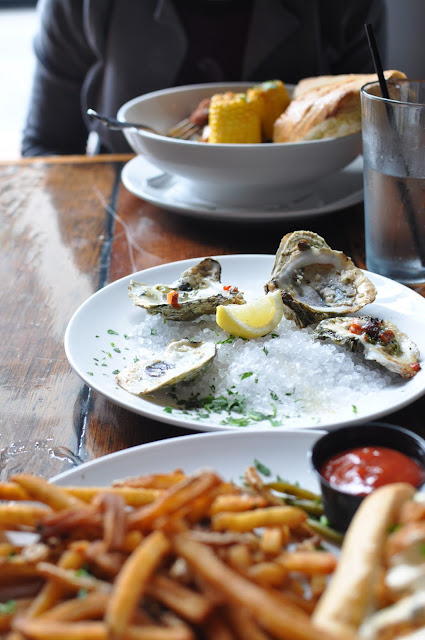 So many cute shops in Savannah. I mean, how PRETTY is this?! 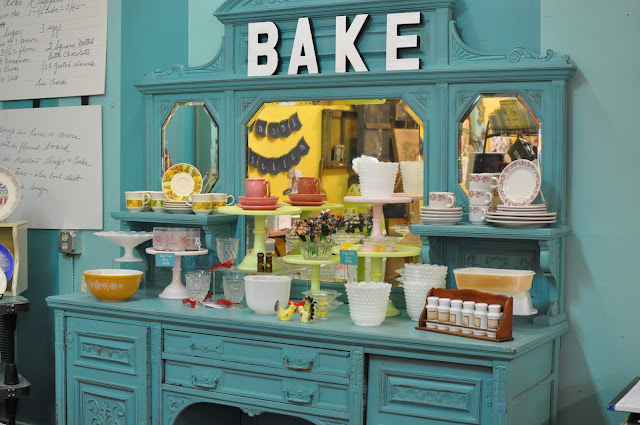 We had a fabulous time in Savannah. If you're ever in the area, I suggest checking out the places I mentioned! They're totally worth it! :) We also visited Tybee Island, GA and Hilton Head, SC on this trip, but I'll save those to share later.

Have a great weekend!

Posted by Heather Doolittle at 11:49 AM 2 comments: