I have been meaning to make card for Moxie Fab World's "Map to  Your Heart" challenge, but I just kepyt putting it off. Well, the deadline is tomorrow and so I am right under the bell with this card. I really wanted to make something with a map on it though and I kept thinking about it!
I got the map from Google Images (my go-to place for pictures!) and I starred where I live (relatively-- in the area at least) with a brad. I had seen the sentiment on Pinterest, and it had stuck in my brain so I made my own with Microsoft Word. 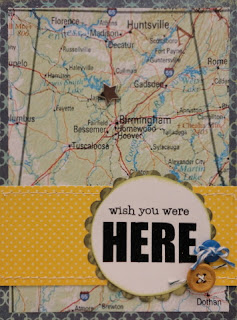 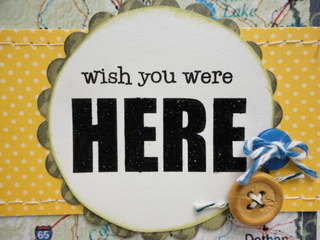 Thanks for looking! Hope you'll play along with the challenge too!
Posted by Heather Doolittle at 7:25 PM

Fantastic card!!! Love the sentiment with the map

Love this card, such fun.

What an awesome card! I love the little star brad too!

So very cute Laura!! I wish I had your card making talents!! You just know exactly what to do it seems in order to make them just adorable :)

Hey Heather! Thanks for linking this up to the Map to Your Heart challenge in the Moxie Fab World! I'm so glad you "mapped" out some time to play along! :)

Your card is so cute! I love the twine tied through the buttons.
Good luck with the challenge! :)

Awesome card Heather. I saw the challenge too but didn't have time to participate. Your map is a great idea!