I have so many photos and stories to share about my trip to Europe. I don't really know if I will have a certain pattern of posting things… lately I've felt very unmotivated when it comes to crafty things or blogging. Meh. Wish it was't that way, but it is what it is I suppose.

Anyway! I have, like, 1000 pictures that I took on my trip to Paris and Berlin. Yeah… that's a lot to look through. But for now, I feel like sharing this one photo. It's my favorite. :) :) 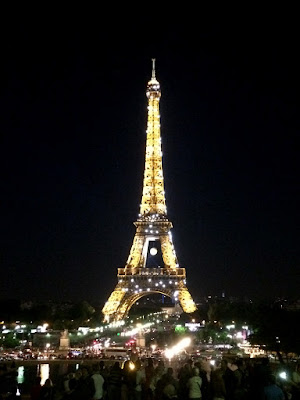 We had visited the Eiffel Tower the previous day during the daytime, but it's a whole different thing seeing the tower at night. Part of the group had went to Hard Rock Cafe to buy t-shirts. We braved the metro and made it through without a problem!! I was so proud of us-- even though I wasn't the one figuring out how to go and where to stop. LOL After everyone got their t-shirts, we were trying to figure out if there was anything that we wanted to do since we were out and about. It was after 10:00pm and so all the stores were closed, so no shopping. I suggested we go to the Eiffel Tower to see it all lit up! So we went. And

It was magical. So surreal. We were there about 10 minutes and then the light show on the tower started. All those lights flashing. It was amazing. It almost looked like the Eiffel Tower was sparkling. I loved it. There was a guy singing with his guitar and it cracks me up thinking about his cute little accent while he was singing American songs. But it added to the atmosphere. ;)

Later, we were discussing what our favorite parts of the trip were. Ms. Bowman said that hers was seeing the Eiffel Tower at night. That made me so happy because if I hadn't have said anything, we wouldn't have went that night. And it ended up being a fabulous experience.

It still makes me happy thinking about it. :)

Posted by Heather Doolittle at 12:11 PM

Ahh it looks like you all had fun!! I especially liked hearing about the guy singing! :) And seeing the Eiffel tower lit up is now on my bucket list!